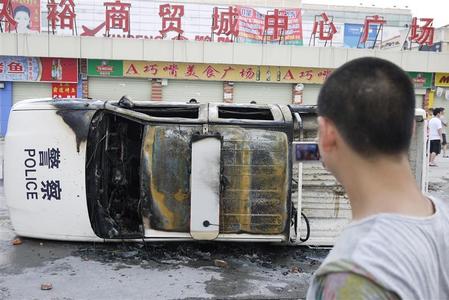 Chinese protesters reach a standoff with riot police in Zengcheng, near Guangzhou. The clashes highlight the authorities’ struggle to control social frustrations. Rioters burned police and fire vehicles in a third day of unrest in southern China’s manufacturing heartlands, witnesses have reported.
Hong Kong broadcasters reported that armed police fired teargas as they sought to disperse the crowd and detained at least a dozen demonstrators.
The clashes, which began on Friday after a fracas between security officers and a pregnant street vendor in Xintang, Guangdong province, highlight Chinese authorities’ struggle to control social frustrations. It is thought that most protesters were migrant workers like the vendor. Last week hundreds of migrant workers clashed with police in Chaozhou, also in Guangdong, following a dispute over unpaid wages. In Lichuan, Hubei, as many as 2,000 protesters attacked government headquarters last Thursday after a local politician who had complained about official corruption died in police custody.
Guardian

1 thought on “Made in China”